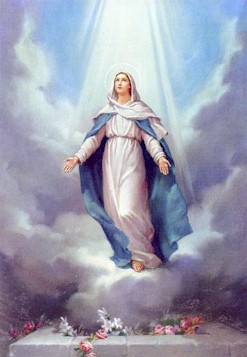 First celebrated in Palestine, the oldest feast for the mother of Jesus Christ is the Assumption of Mary.  Commemorating her death and her ascent into Heaven, this Marian feast has been celebrated universally since the seventh century.  The Assumption is also known as the Dormition (Falling Asleep) of the Theotokos (Mary) among the Eastern Orthodox and Eastern Catholics.

To hear an Eastern commemoration in Arabic, please visit:  http://www.youtube.com/watch?v=DGNXDVKKRJs

Roman Catholics and Eastern Christians disagree as to whether she died in her sleep and was resurrected on the third day or was assumed directly into heaven in bodily form, the both agree that her ascent was a significant event in Christian history.  For Roman Catholics, the ascent into heaven happened from her stone house in the Ephesus vicinity of Turkey (the House of the Virgin Mary) and for Eastern Christians, her ascent took place from the foothills of the Mount of Olives in Jerusalem (Mary’s Tomb).  Both are well-visited by pilgrims — Christians and Muslims.