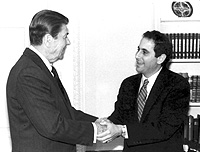 The chief legal officer for the U.S. Department of Labor during President Ronald Reagan’s administration, American-Palestinian George Salem was responsible for enforcing more than 130 laws that regulate the nation’s workplace.  Those laws included those guaranteeing minimum wages through the Fair Labor Standards Act, ensuring occupational safety and health pursuant to the Occupational Safety and Health Act, and maintaining pension security under the Employee Retirement Income Security Act.

Born in Jacksonville, Florida to parents from Ramallah, Salem served as the executive director of Ethnic Voters Division of the Reagan-Bush campaign overseeing 100,000 volunteers of 43 different nationalities.  During that time, some had suggested that Salem say he was Lebanese to make it “easier.”  He refused and told them, “I’m not Lebanese, I’m Palestinian.”

In addition to playing key roles in Republican presidential campaigns, Salem co-founded the Arab American Institute in 1995 — a non-profit organization committed to the civic and political empowerment of Americans of Arab descent. (www.aaiusa.org/)

A respected attorney with his own law practice in Washington, D.C., Salem once told the Institute for Middle East Understanding that he was “most proud of having achieved my accomplishments, while openly declaring my ethnicity and pursuing Palestinian rights at every stage. People should see Palestinian Americans in all walks of life. When they see us as mainstream members of society then we can better articulate the Palestinian narrative.”