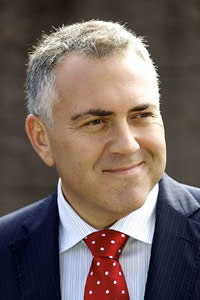 Born to a father of Palestinian and Armenian heritage in Bethlehem (Palestine), Joe Hockey is a member of the Australian House of Representatives.  Specifically, he represents the Division of North Sydney and the center-right Liberal Party of Australia.  Degrees in Art and Law from the University of Sydney, Hockey’s interest in politics began as a young boy when he discovered the importance of achieving a cause by working through government.  According to his official bio, his “first victory came at the age of fourteen when he successfully lobbied his local Council to obtain cricket nets for local children in Northbridge.”

His interest continued to peak as he took part in student politics and even more as a finance and banking lawyer.  In the past, Hockey has served as Minister for Financial Services and Regulation (1998–2001) as well as Minister for Small Business and Tourism (2001–04).  Since 2010, he has been the Shadow Treasurer in Australia’s coalition government.

Speaking to Australia’s popular “Lateline” in 2003, Hockey had this to say about the Middle East:  “. . . . individuals lose hope for the future, and I think what we have to do as part of a world community is provide hope for people that they can be part of a democratic process, that they can participate in the wealth that is generated by their land. . .”