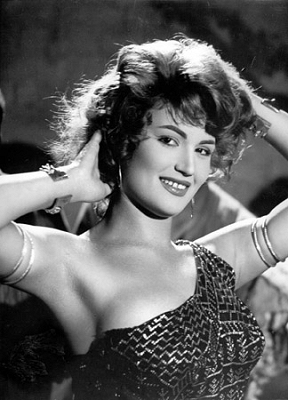 Referred to as the “Princess of Cairo,” Najwa Fouad was one of the most famous belly-dancers in the Arab World.  Born to an Egyptian father and Palestinian mother, Najwa lost her mother a few years later while in Jaffa, Palestine.  Her father soon married another Palestinian woman—a kind and tender-hearted step-mother whom Najwa loved as her own.

At age 14, she danced for a celebrity agent who convinced her to rent a belly-dancer costume and perform on stage.  She later performed at the infamous Sahara City nightclub.  From then on, a star was born.

The esteemed music composer Mohamed Abdel-Wahab even composed an exclusive piece for her called Qamar Arba’tashar (Full Moon) – an opportunity Najwa used to bring theatrics to the art of belly-dancing.  She would say in a later interview that, “To be a dancer, a respected, famous dancer: this was my dream since I was about six, when I started dancing, anytime and anywhere.”

A respected dancer, there were many requests to see her dance. Among them were US Secretary Henry Kissinger and US President Jimmy Carter.

To view a sample of her dancing, please see:  http://www.youtube.com/watch?v=01Zz15h8aAE&feature=related

After leaving the stage, she became a cinema producer.