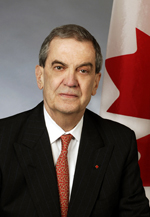 A Canadian senator and a former holder of various ministries, de Bané was born in Haifa, Palestine (1938). His Lebanese family immigrated to Canada in 1947 amid increased tensions and great likelihood for war in Palestine, eventually settling in Quebec.