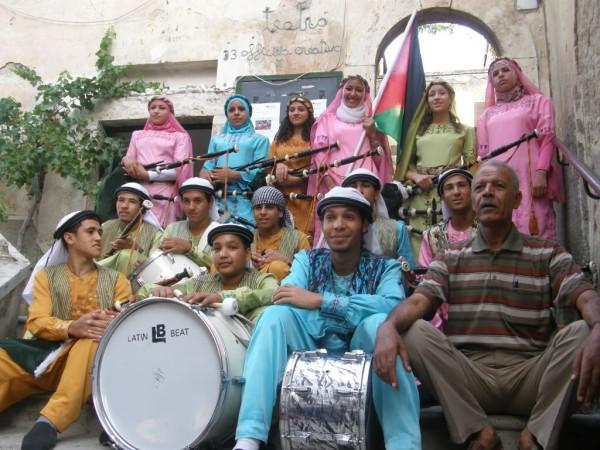 When Britain colonized Palestine in the early 20th century, the bagpipes were a positive feature left behind.  The British Empire expanded and its military forces included the Highland regiments.  As a result, the Scottish Great Highland Bagpipe became well-known worldwide.  Palestine was no exception.

They became incorporated into the Palestinian culture and celebrations.  The irony is that the bagpipes were an instrument of the Roman Empire’s infantry.  Palestine had been colonized by the Romans so some can conclude that the bagpipes have come full circle.

To hear a BBC audio slideshow about Palestinian bagpipers, as well get a taste of the sounds of Palestine during Christian and Muslim holidays, please click:  http://www.youtube.com/watch?v=QTQd174-O6c

In fact, it is not just the religious scouts throughout Palestine who play the bagpipes.  There is a bagpipe band (Guirab) from the Burj al-Shemali refugee camp in Lebanon who has even performed in Italy.  To hear this talented group, go to their MySpace page at:  http://www.myspace.com/guirab