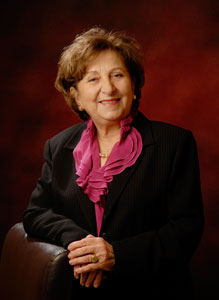 Ms. Claudette Habesch is the Secretary General of Caritas Jerusalem, the organisation representing the socio-pastoral services of the Catholic Church in the Holy Land.

Claudette Habesch was appointed Secretary General in 1987. From 1999 to 2007, Ms. Habesch was President of the Caritas Middle-East and Northern Africa region (MONA) and Vice-President of Caritas Internationalis.

Claudette Habesch was born in Jerusalem. She studied at the Beirut College for Women receiving a B.A. in Social Work, followed by an internship in medical social work at the American University Hospital in Beirut. She speaks English, French and Arabic.

A passionate defender of Palestinians’ rights and peace in the region, Claudette Habesch is a member of the Committee for Christian Affairs of the Palestinian Authority (PA). She is also member of the Islamic-Christian Commission funded by the PA to support Jerusalem and the Holy Sites. In addition, Claudette Habesch has been active since 1992 in the Middle East Council of Churches (MECC), in the Department of Service to Palestinian Refugees.

Habesch is the Vice-President of the Board of Trustees of Bethlehem University. She holds various decorations and awards, including the Lady Commander of the Order of St. Gregory the Great with Medallion and the Lady of the Equestrian Order of the Holy Sepulcher.

Claudette was the 2006 recipient of the Holy Land Christian Ecumenical Foundation’s HCEF Award. She is member of the HCEF Advisory Board since 2010.