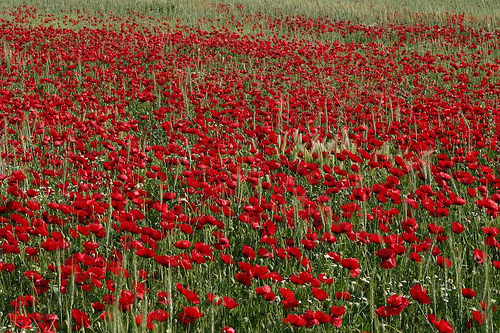 Typical of most lands in the Mediterranean, the climate is moderate.  The summers are hot but dry.  Light clothing is best during the day and a sweater is recommended in the evening.  The winters rarely have snow but they are cold and rainfall is common between the months of November and February.  Warm clothing is a must.

As to the terrain, the land is varied.  From the rugged hills of the West Bank to the flat lands and sand dunes of Gaza, the topography of Palestine offers diversity and stark contrasts.  Because many Palestinians were farmers throughout their history on the Holy Land a.k.a. the biblical “land flowing with  milk and honey,” it should come as little surprise that the land is abundant with agriculture and flora.

Speaking of flora, Palestine is known for its beautiful variety of wildflowers.  Wild tulips and black irises are found in desert areas.   Brightly-colored poppies are found in the fields.  A number of plants are named specifically after places, such as the Jerusalem Buttercup, Jerusalem Sage, Jerusalem Spurge, the Star of Bethlehem, and the Bethlehem Milk Vetch.  Some are even named after the country itself.  They include the Palestine Comfrey, Palestine Sage, and the Palestine Iris.

And according to Lucy Nusseibeh, Director of Middle East Non-Violence and Democracy, it is estimated that there are 1,000 different kinds of flowering plants within a five-mile radius of Jerusalem alone.  Orchids, rockroses, cyclamens, and the list goes on.

Ultimately, the flowers are viewed as symbols of hope and resilience.