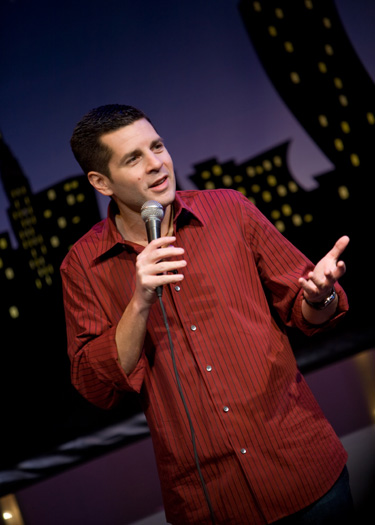 Dean Obeidallah, co-founder of the annual New York Arab-American Comedy Festival, jokingly advises Arab-Americans, “For flight, dress white.”  Viewing his role as a “missionary of comedy,” Obeidallah’s “Axis of Evil” comedy tour brought humor during a politically-sensitive time and soon resulted in a Comedy Central special.  To see a clip from the “Axis of Evil” DVD, please view:
http://www.youtube.com/watch?v=n6t1s8MMvFE

Obeidallah, who practiced law before his comedy career, often funds his own tours in efforts to present Muslims and Arabs in a positive light to American audiences.  In August, 201l, he brought “The Muslims are Coming” to audiences in the American South.  He interviews townspeople and hands out free tickets to performances and has a movie in the works documenting the tour.  In the process he generated excellent press:
http://www.dnj.com/article/20110814/NEWS01/108140317

Obeidallah, originally from New Jersey, is the son of a Palestinian father and a Sicilian mother. He has appeared on many national and international radio and television programs.

In a story for CNN.com Obeidallah quotes Robert F. Kennedy, “Few will have the greatness to bend history itself; but each of us can work to change a small portion of events, and in the total of all those acts will be written the history of this generation.”  With his thought-provoking comedy and outreach, Obeidallah is doing his part to change negative perceptions of both Arabs and Muslims in the Western world.

For more information about Obeidallah, and clips from his comedy routines check out his website and twitter page:http://www.deanofcomedy.com