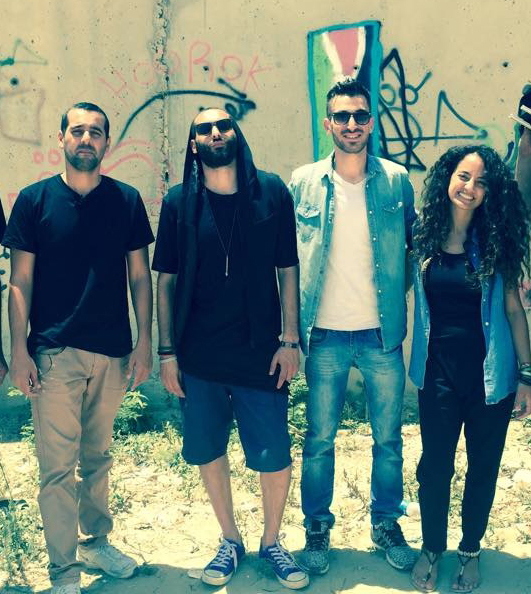 Dubbed the first Palestinian hip hop crew, DAM (Da Arabian MC’s) was formed in 1999 in the mixed Jewish-Arab city of Lyd by brothers Tamer and Suheil Nafar, and Mahmood Jreiri. In addition to helping jump-start the hip hop movement in the Middle East, the group is also known for its progressive lyrics, which often feature pointed critiques of issues ranging from the ongoing Israeli occupation to gender inequality.

Fusing the musical styles of traditional Arabic melodies and urban hip hop, DAM’s unique songs manage to bridge both the East and west through rhyme. Though the group primarily writes in Arabic, they’ve also been known to rap in both English and Hebrew.

Language barriers, however, hasn’t stopped DAM’s fan-base from growing internationally. In fact, the group even counts some Israeli listeners among its fans. Tamer Nafar recalled one instance during a Q&A session that he had one of his first encounters with a Jewish-Israeli fan from Lyd.

“He told me, ‘I don’t like your politics, but I grew up on your music and I read that you go and do workshops for Palestinians in Lyd. But we’re proud to be from the same city as you and we’re also in poverty — why do you forget about us?’”

“I was shocked,” Nafar said. “I was really moved.”

In 2015, the trio was joined by its first female member, Maysa Daw, through the release of their latest single, Who You Are(Meen Enta). Though Haifa-native Daw has performed with DAM in the past, Who You Are was the first project that she and her fellow group members collaborated on in the studio from start to finish.

The video, which was recorded in conjunction with the United Nations Population Fund (UNFPA) and directed by Academy Award-nominated filmmaker and Ajami director Scander Copti, took a critical aim at gender inequality and the more patriarchal society DAM’s members grew up in.

“I am the dishes, the ironing, I am everything,” Daw sings in Arabic in the group’s latest video. “I am nothing, but remind me: Who are you?“

But DAM’s lyrical critiques don’t stop at gender inequality. Though the group’s songs largely cover topics relating to the Israeli-Palestinian conflict, racism and poverty, Nafar stressed the importance of tackling inequalities wherever they are.

“I’m Palestinian and I will fight for my rights, but the world is bigger than Palestine,” Nafar said, citing other conflicted parts of the world, such as neighboring Syria. “The world should recognize the occupation, but at the same time we should know that we’re not the only ones. We’re part of a big struggle in a way — we suffer differently, but we’re part of a big struggle.”

In addition to writing and performing, DAM has also made a commitment towards giving back to their hometown, Lyd, to provide programs and opportunities typically denied to Palestinian citizens of Israel. The group also conducts workshops for youth both within Palestine and throughout the US, Canada and Europe.

When asked about the complexities of identifying as Palestinian while also carrying Israeli citizenship, Nafar emphasized that his roots are clear.

Though the group has been rhyming since the late 1999, their rise to international prominence occurred after their 2006 release of their first hit album Dedication (Ihda’) and again in 2008 after the release of the acclaimed documentary filmSlingshot Hip Hop, in which DAM plays a starring role. The documentary follows the development of hip hop throughout Palestinian society, starting from the time DAM pioneered the art form during the late 1990s.

But that wasn’t the last time DAM would be featured on the big screen. In fact, the group recently finished working on a feature film that is set to be released in February 2015. Though Nafar could not reveal too much about the film, he said the film would be based in music.

“It discusses a new creative activist generation of Palestine,” Nafar said. “It’s about music, about love, Palestine, women’s rights — and it’s all reflected through rhymes.”