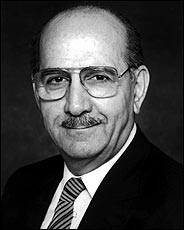 “I found myself fascinated by the research process and I became completely engrossed in it. Looking back, I realize that the next step that I should take in my research always seemed to be inescapably obvious. It was as if I had caught on to a link in some endless chain of knowledge.”

Dr. Mansour Armaly was a Palestinian physician who was internationally recognized as the pioneering researcher in the modern medical treatment of glaucoma. Mansour Armaly was born in Shefa-‘Amr, Palestine, but relocated to Haifa with his family in 1935. In 1944, Dr. Armaly attended the prestigious American University of Beirut as a pre-medical student.

After the Nakba, the Armaly family followed Dr. Armaly and relocated to Beirut, Lebanon. Dr. Armaly graduated Medical School in 1952. He decided to pursue his residency in the field of Ophthalmology and it was there that he found his passion for research. He was accepted into a research fellowship at the University of Iowa where he received his master’s degree in 1957.

He began a 13 year research study on the effects of glaucoma and heredity, addressing the question of how pressure causes vision loss. He became a full professor in 1966 at the University of Iowa. He creating one of the world’s leading laboratories in glaucoma research and has published more than 100 scientific articles.

Dr. Armaly became department chairman at George Washington University Medical Center in 1970 until his retirement in 1996. He passed away in August 2005. He is survived by his wife, daughter, son and two grandchildren.