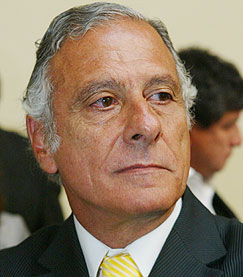 A renowned Chilean politician of Palestinian origin, Eugenio Tuma was born in the Araucania region of Temuco, Chile. Throughout his career, Tuma has worked as an economist, business administrator and accountant auditor for the University of Chile in Santiago. During his first years of work in the Chilean industry, he became the Vice President of the Engineer Professional Association of the IX Region between 1985 and 1986.

Following the footsteps of his father, Tuma eventually entered the political arena. His father, Juan, was the son of Palestinian immigrants who came to Latin America in the twentieth century, and he later went on to be one of the founders of the Agrarian Labor Party.

Known for being a fierce advocate of human rights in Chile, Tuma also participated in the founding of the Human Rights Committee of the IX Region in 1986. He has also made contributions through writing — most notably, his chapter entitled “Freedom of expression in Chile: The transformation of a pubic freedom in economic freedom” in the book Express democracy: between the right and duty.