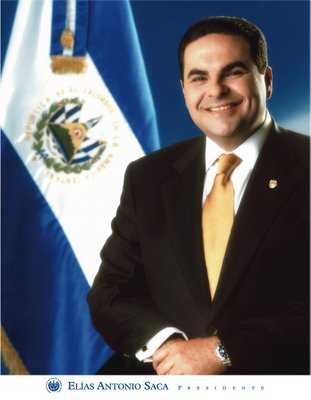 Tony Saca, the son of Palestinian immigrants, was elected President of El Salvador for a five-year term in 2004. A member of the conservative Nationalist Republican Alliance, Saca defeated Shafik Handal (now deceased) of the leftist Farabundo Martي National Liberation Front — ironically of Palestinian descent, as well.

Tough on crime and drugs, police once foiled an attempt on Saca’s life by gangs. After the assassination attempt, Saca was quoted as telling the press, “I want to send a message to these people who want to assassinate me, that they are not going to stop us and we are going to continue capturing drug traffickers and people involved in organized crime.”

Though a conservative and an advocate of the free market, Saca initiated the “Solidarian Network plan” with aid from European countries. The goal was to help economically-poor communities by providing monies (about $15-$20) per eligible family.

A popular former sportscaster, he gained widespread visibility for his coverage of soccer games before going into politics.