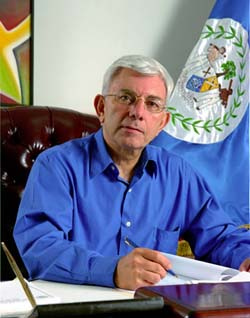 Instrumental in drafting that country’s first constitution, Said Musa served as the prime minister of Belize from 1998 to 2008.  Of Palestinian descent, Musa was the first prime minister to be elected two consecutive terms since Belize first became independent in 1981.

Born in poverty to a family of eight children, Musa not only rose through the government ranks to be elected as the Prime Minister but he also served as the Attorney General, as well as Minister of Economic Development

A lawyer and a member of the pro-capitalist Christian Democrat People’s United Party, he is said to have led Belize to significant growth with “Keynesian Economics.”  This sort of economics advocates a mixed economy—predominantly private sector, but with a large role of government and public sector.

A believer in true Caribbean unity, Said was once quoted as saying, “Let us work toward greater cooperation with all Caribbean Countries, whether we speak English, Dutch, French or Spanish, whether we are independent or not, and whether we be island or continental territories.”