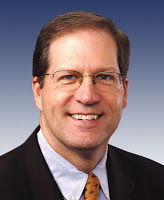 During the 2007 Arab American Institute’s National Leadership Conference in Dearborn, Michigan, Republican US Senator John E. Sununu discussed not only the liberties of Arabs and Arab-Americans in the wake of the Patriot Act, but he talked of searching for his grandfather’s home in East Jerusalem.

One of eight siblings born to former New Hampshire Governor John H. Sununu and the former Nancy Hayes, Sununu enjoyed a successful career in the high tech industry (B.S., M.S. in mechanical engineering from the Massachusetts Institute of Technology and M.B.A. from Harvard) before running successfully for Congress in 1996.  A respected fiscal conservative, the Council for Citizens against Government Waste rated him 100%.  His constituents later elected him to the U.S. Senate in 2002.

Besides earning respect for his consistent voting record, Sununu shaved his head in July, 2005 to show solidarity with Senator Arlen Specter who lost his hair during chemotherapy for Hodgkin’s disease.   In January, 2008, he saved the life of journalist Al Hunt of Bloomberg News by performing the Heimlich maneuver after Hunt began choking on a piece of chicken.