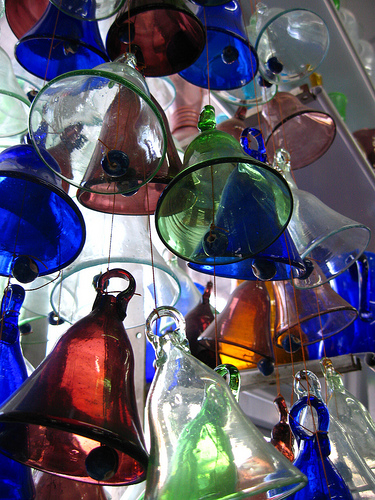 The art of making glass in Hebron began as far back as Roman rule in Palestine.  A rich history, Hebron-stained glass has been found in the Cave of Machpela – which served as a church during the Crusades era and is also in the Dome of the Rock in Jerusalem.  The glass industry of Hebron flourished especially in the 14th century, with no less than 14 glass factories.  The glass was exquisite and was exported throughout the Arab world.  There was even a quarter called the “Glass-Blower Quarter.”  Toward the end of that century, Hebron’s glass-making declined due to competition from European glass producers but remained famous.   In fact, at the World Fair of 1873 in Vienna, glass ornaments representing Hebron were on display.

Glass in Hebron used to be melted with local raw materials, sodium carbonate, and coloring additives such as iron oxide and copper oxide. As a sign of the times, however, recycled glass is often used.

Still a family trade, glass-blowing continues to survive in Hebron but is facing extinction.  One of the last remaining families on Hebron’s Kazazeen (Glass Makers) Street is the Al-Natshah family.  “It’s a heritage message that we carry through our family generations. We know that we must protect and preserve it,” Dayaa Al-Natshah says.

To get a taste of Hebron glass-making and ceramics, please see: http://www.metacafe.com/watch/1027231/hebron_glass_ceramics_factory_woooooo/