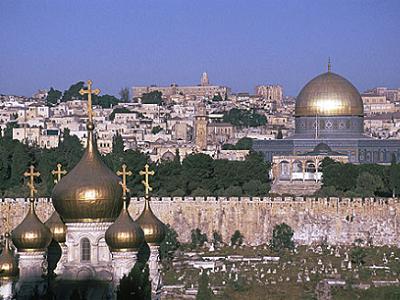 The crossroads of the world, Palestine has been conquered by different civilizations over the centuries.  Besides its strategic location, it is holy to the three great monotheistic religions:  Christianity, Islam, and Judaism.  For this website book, the focus will primarily remain on the West Bank, Gaza, and Jerusalem.  (There are notable exceptions for the coastal areas and Galilee in the video link, however)

The Dome of the Rock in Jerusalem (discussed in Surprise 42) is perhaps the most recognizable of the holy sites with its beauty, nobility, and importance to Muslims.  What many people do not realize are the number of historic churches.  Wherever a major event happened in Christianity, a church was built.  From the birth of Jesus in Bethlehem to the Crucifixion and Resurrection in Jerusalem and all the events in between, churches have been erected.  To view several of these churches, please go to:  http://www.youtube.com/watch?v=683JeJPL7UY

In the world of archaeology, there are so many sites:

*There was a network of ancient aqueducts between the Hebron hills and Jerusalem built to maintain regular water supply for the cities of Jerusalem and Bethlehem.

*There is Jacob’s Well at the entrance of Nablus.  This well was dug by Jacob for himself and his flocks. It is believed to be connected the story of Jesus’ encounter with the Samaritan woman who offered him a drink of water.

*There is Deir al-Balah in Gaza City.  Built by St. Helena in 372 AD, archaeological excavations uncovered a cemetery dating back to the late Bronze Age.  The cemetery contains a number of tombs, pottery coffins, pottery objects, bronze pots, and a mosaic floor.

Palestinian archaeologist and Deputy General of Antiquities Dr. Hamdan Taha compiled a list of these sites for a “This Week in Palestine” article in 2006.  To read more, please see:http://www.thisweekinpalestine.com/details.php?id=1959&ed=133&edid=133