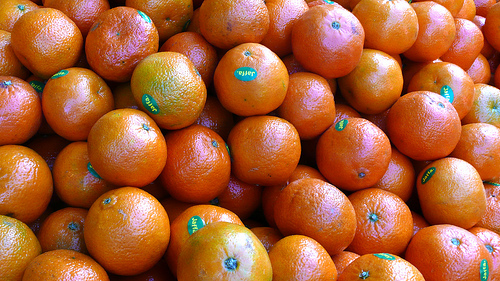 As the biblical “land flowing with milk and honey,” the Holy Land has always been lush with vegetation. The famous Jaffa oranges were a symbol of this. Sweet and nearly seedless, the oranges became the main export in Palestine. In fact, the Citrus Control Board in Palestine (British Mandate) noted that exports of citrus, which totaled only 1.25 million cases in 1922 had increased to 3 million in 1930 and 1931. A whopping 15.25 million was reached in 1939.

To see a photo of Jaffa oranges being packed in the early 1920s,go to: http://www.palestineremembered.com/Jaffa/Jaffa/Picture1179.html
The beauty of the Jaffa orange was that it could be left on the trees until they had to be picked. The wonderful attributes of the Jaffa oranges werre acknowledged as early as 1886 (by the American consul in Jerusalem, Henry Gillman). It’s also been historically noted that the rapid expansion in citrus cultivation in the 1850s was the most important innovation in Palestinian agriculture.