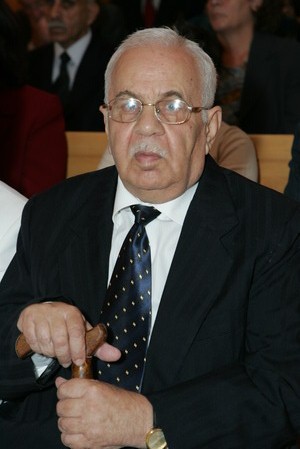 Jamil Alloush was born on June 12th, 1937 in Birzeit, Palestine. He was the third of seven children. From his younger days he excelled in school, attending the Latin School in Birzeit and then Ahlia College in Ramallah where he graduated in 1957. After high school he went to Kuwait to work in the Finance Ministry. He attended the University of Damascus where he earned his Bachelors of Art in Arabic Language in 1967. He then earned both his Masters(1972) and Doctorate (1977) in Arabic Grammar at the St. Joseph University in Beirut.

Dr. Alloush wrote about thirty books about poetry and the Arabic Language. When he was 66 years old, he wrote his own autobiography titled “Jamil Alloush: Stories and Memories”. He wanted to make sure that the importance of the Arabic Poetry and language continued long after his time.

He also appeared in many television programs promoting the Arabic language and was very involved in academia. He taught at the College Arabic (1975-1976) , Community of Salt (1979-1982), Faculty of Engineering Professions of Oman (1982-1989), and the Faculty of University of Applied Engineering Oman (1989-2007). He supervised many doctoral theses at Saint Joseph University. He was also a member of the following organizations: Association of Writers in Kuwait, Palestinian Writers Union in Kuwait, Arab Club in Oman, and Jordan’s Writers Union in Oman. In recognition of his achievements and dedication to Arabic language, Dr. Jamil Alloush has a street named after him in Amman, Jordan.

Dr. Jamil Alloush died on the 25th of July 2010 from Parkinson’s Disease. His wife, three daughters, and son continue his legacy.