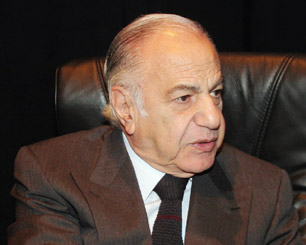 José Said Saffie is the President of BBVA bank and a prominent businessman in Latin America. He belongs to an important business group in Chile with a presence in Peru, Argentina, Brazil and Colombia.

Said was born in Arequipa, Peru, where his grandfather, Issa Said, arrived from Bethlehem at the end of the 19th century. Issa Said and his sons successfully developed the textile industry in Bolivia, Chile and Peru.

From a young age, José Said participated in the family business, which he expanded to include sectors in finance, health and industry. He later created the holding called Grupo Said and extended his investments to a net of Latin-American countries.
Said exhibits an admirable personality, and shows enthusiasm and generosity in topics such as culture, humanity and religion. He has been recognized with numerous honors and decorations throughout his life.

He professes the Catholic faith, and maintains a close relationship with the ecclesiastical hierarchy. His generous collaboration with the Catholic Church has been recognized by the Vatican as well as the Latin Patriarchate of Jerusalem.

About the Foundation objectives, José Said says “we unite our efforts, talents and abilities in a collective and coordinated objective to revitalize our essence with Palestinian traditions and hallmarks. And also, accompany the Palestinian people holding from this small corner of the world a bridge of solidarity with our brothers”.

José Said has been awarded on numerous occasions for his outstanding contribution to Chile and Latin America. His honorary awards include 2003 ICARE Award category Entrepreneur; Outstanding entrepreneur 2008; Outstanding Chilean investor in Argentina 1998; Business Family Award from the Los Andes University in 2010.

In 2012, the foundation HCEF awarded José Said the “Palestinian Diaspora Award” for his contribution to the culture, values and needs of the Palestinian people.

In 2013 president of the Palestinian State, Mahmoud Abbas, awarded Said – together with outstanding Chilean entrepreneurs – the Merit and Excellence medal.

This year 2014, the Cultural Heritage Corporation of Chile, awarded Said for his work in the preservation and dissemination of national heritage and management related to culture and education.