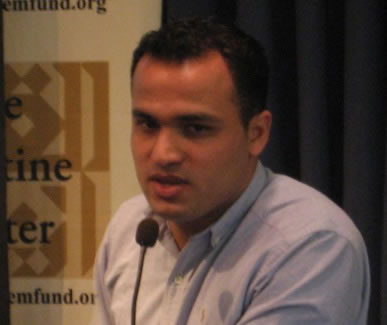 Born and raised in Gaza’s Rafah refugee camp, reporter Mohammed Omer is the winner of the 2007 Martha Gellhorn Prize for Journalism, as well as the Norwegian Ossietizky prize in 2009.  The Martha Gellhorn Prize is named after the famous war correspondent and is given to the reporter whose human stories can penetrate “the established version of events and illuminates an urgent issue buried by prevailing fashions of what makes news.”  The Ossietizky Prize was awarded for “outstanding achievements within the field of free expression.”

Omer received both prestigious awards by the tender age of 25.  With journalism in his blood, he had started writing and publishing regularly in dozens of newspapers and magazines worldwide as a young adult.  The periodicals included the ArtVoice Weekly, the Swedish dailies Dagen Nyheter and Aftonbladet, the Norwegian daily Dagbladet, the Swedish magazine Arbetaren, and the online magazine Electronic Intifada.

Interestingly, he told the Vermont Guardian in 2006 that it was never a dream to be a journalist but rather an interpreter for the International Red Cross. At the age of six, Omer had experienced seeing his father imprisoned in an Israeli jail.  From that point on, he took on odd jobs to help support his large family.

What changed his mind?  The destruction in Gaza from bombing raids was the catalyst.  He said, “. . . because I wanted to show the truth of the world to make people understand what’s going on.”

Often referred to as “the voice for the voiceless,” Omer continues to enlighten people through his writings.