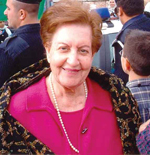 “She did not hold advanced degrees but had the ability to conduct field research with results envied by anthropologists and ethnographers. The trove of objects and data she gathered on Bethlehem’s history is invaluable. To her obstacles were only challenges that were tackled with magnanimity and stamina, she had no time for idle conversations. The City’s heritage was fast disappearing and she was on a mission to preserve it for future generations.”

No historian, ethnographer or anthropologist has made greater advances in preserving the history of Bethlehem than Julia Dabdoub. Born in Bethlehem on December 26, 1926, Mrs. Dabdoub intimately knew Palestine pre-Nakbah and strove to sustain its culture, beauty, and social fabric after disaster struck.

Julia Dabdoub was a community leader, devoted wife to her husband, Dr. Michael Dabdoub, and loving mother to their children.  In 1948, Julia Dabdoub was elected as head of the Bethlehem Women’s Union Al-Itihad (AWU). Under her guidance the AWU became a cultural community center, hosting book launchings, art shows, music recitals, bazaars, and innumerable other activities.

Salwa Mikdadi, Julia’s chronicler says of the AWU: “The work ethics of Al-Itihad were infused with Mrs. Dabdoub’s pragmatic approach and indomitable spirit. There are few institutions in Palestine that have served their community with unwavering loyalty over the span of six decades. Their name is the key to their success. They were all united in their devotion to Bethlehem irrespective of their religious or economic background.”

Well respected in her community, all major institutions of Bethlehem sought her name on their boards. She sat on the board of trustees of Bethlehem University, as she had been instrumental in its founding by setting up the initial steps with Jordan.

Mrs. Dabdoub’s passion for culture, identity and preserving her cultural heritage led to the founding of Baitouna Al-Talhami in 1972. Baitouna Al-Talhami which means “our Bethlehem Home” is an ethnographic museum which represents a typical Palestinian home in Bethlehem. Each room demonstrates how life was lived in the past and marks changes made throughout centuries.

The success of Baitouna Al-Talhami led Julia Dabdoub to set her horizons even higher. She dreamed of creating a modern museum that would serve as, “A bridge between the past and future of the city, a community based project that will insure the continued preservation of the city’s history and culture.” This dream was the Bethlehem Museum.

In the most sincere way Bethlehem Museum of History, Heritage and Culture is a tribute to this great, inspiring woman. Mrs. Dabdoub did not live to see her dream become a reality but her children and their children’s children will be able to enjoy its fruits.