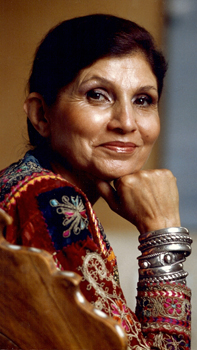 “I found Palestine again on canvas… This is where I found myself.”

Though award-winning painter and sculptor Jumana El Husseini has spent the last several years painting from her 16th arrondissement apartment in Paris, the subject of her work has always been somewhere quite different —Palestine.

“I found Palestine again on the canvas,”El Husseini said in an interview with Anne Mullin Burnham. “I live my youth, my early days there —all the memories, the birds, the flowers, the butterflies, the greenery, the Dead Sea, the windows, the doors, the skies of Palestine. This is where I found myself.”

El Husseini was born in Jerusalem on April 2, 1932 to Jamal El Husseini and Nimati El Alami, both of whom belonged to very prominent Palestinian families. El Husseini’s father and uncle were very involved in the political aspects of Palestine and the British Mandate. Her father was imprisoned several times by the British, who eventually sent him to exile in South Africa before permanently forcing him to leave Palestine. In 1947, El Husseini and her family left Jerusalem for Baghdad before ultimately settling in Beirut, Lebanon.

“After getting married and having children, Lebanon definitely became home,”El Husseini’s son, Omar Bayazid, said of his mother’s experience in the diaspora. “But her thoughts and her life was depicted through her paintings of Jerusalem.”

It was in Beirut where El Husseini completed her schooling. In 1953, she began studying political science at the Beirut College for Women. Afterwards, she went on to study at the American University of Beirut, where her studies took a different path.

“While at American University, she had an elective course in art and the teacher saw that she had potential in drawing and painting, so he encouraged her to do more,”Bayazid said.

With the support of her family and her husband Orfan Bayazid, who she married in 1950, El Husseini began her artistic career. In 1960, she exhibited her work for the first time in Beirut’s Soursok Museum. Five years later, she had her first international exhibition in the Woodstock Gallery in London. Since then, her work has been exhibited in throughout the Arab world, Europe, and North America in countless museums, including the Metropolitan Museum of Art in New York.

Though El Husseini’s work took on many different forms  —from painting to sculpting to embroidery and ceramics — her style could be separated into two distinct periods. Her early works focused almost exclusively on images of Jerusalem, Jericho and Jaffa, which she depicted through paintings of houses, trees, birds and people. After 1987, however, her work began to change.

“The second period was more abstract, and that was due to the first intifada,”Bayazid explained. “Palestine was always very much on her mind and in her paintings.”

Despite spending most of her life in the diaspora, El Husseini’s memory of the Palestine she knew as a girl stayed with her throughout her life through her paintings.

“Her mother used to tell her, ‘Paint Jerusalem forever,’” Bayazid said. “I’m sure she would say the same thing to anybody else.”