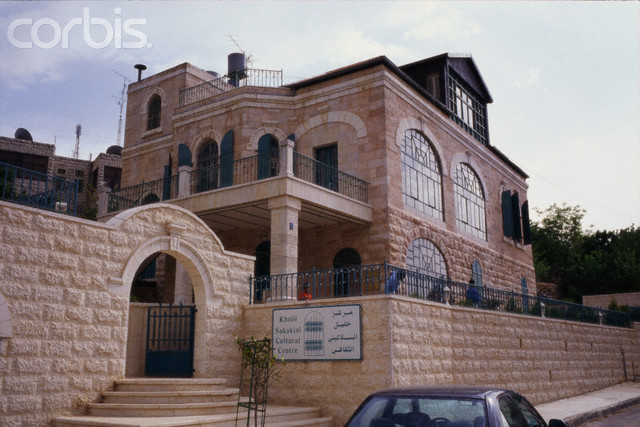 Founded in 1996 and dedicated to the promotion of culture and the arts in Palestine, the Khalil Sakakini Cultural Center Foundation is a non-governmental, non-profit organization located in Ramallah.

A restored traditional mansion is the setting for the Center.  The Center concentrates on the visual arts, as well as several areas that advance a greater understanding of Palestinian identity and history.  These activities include:  concerts, children’s activities, art exhibits, literary events, lectures and film screenings.  See:  http://www.sakakini.org/.  Some activities also take place in other facilities outside Ramallah, such as:  Birzeit, Gaza City, and Bethlehem.

In 1998, the Center designed a website to commemorate the 50th anniversary of the 1948 Nakba (Catastrophe).  During the Nakba, hundreds of thousands of Palestinians fled or were forced to flee Palestine and Israel was subsequently established.  The site features survivors’ testimonies, as well as a list of destroyed villages.  Please see:  http://www.alnakba.org/

So who was Khalil Sakakini, the man who inspired this Center?  Sakakini (1878 – 1953) was a writer and scholar born in Jerusalem to a devout Greek Orthodox family. In 1909, he founded the Dusturiyya School in Jerusalem, which developed an influential model for a secular, Arab curriculum. He is perhaps best known for authoring books on teaching Arabic.

A secular nationalist and pan-Arabist, Sakakini was involved in the early days of the Palestinian national movement for freedom.  After Sakakini’s wife, Sultana, died in October 1939, he devoted a number of poems in her memory.  During the 1948 war, the Sakakini family fled to Egypt.

In 2003, Sakakini’s heirs left documents of his life, along with the history of Palestine.