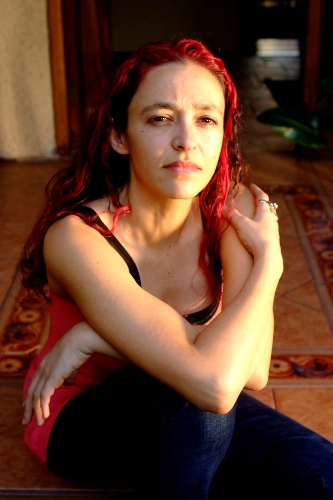 “I would love to return to Palestine, and stay a season longer. Such a complex reality requires time.
It demands to be written and heard about more, from within.”

Lina Meruane is a renowned Chilean cultural journalist and author. She was born in Santiago, in 1970, and currently lives in New York where she has lived for more than a decade. She has written several novels, stories, and essays. Some outstanding titles are Las infantas (The infants, 1998), Cercada (Enclosed, 2000), Póstuma (Posthumous, 2000), Fruta podrida (Rotten fruit, 2007), Viajes virales (Viral voyages, 2012) y Sangre en el ojo (Blood in the eye, 2012). This past year she published Volverse palestina (Becoming Palestinian), in which she relates her torturous experience in seeking her Palestinian roots after a humiliating and oppressive interrogation in Israel.

“I was a suspicious Palestinian with a Chilean passport… It was after that trip, after having seen what I saw and lived what I lived there, that the interest of delving into my past awoke in me… I understood firsthand what happens to many Palestinians living there all the time, but of course, on a much worse scale. I understood at that moment how the violence and oppression generates a certain submission, or rather the appearance of submission, but also generates the will to resist,” she stated to the Chilean newspaper La Segunda.
On the other hand, she said to Al Damir Magazine: “I would love to return to Palestine, and stay a season longer. Such a complex reality requires time. It demands to be written and heard about more, from within. I could only write from a foreigner’s position, which turned into a position of commitment.”

In 2011, Meruane received the Anna Seghers Literature Award from Germany, and in 2012, she was awarded the Sor Juana Inés de la Cruz Award in Mexico. Meruane is the founder and director of Brutas Editoras, an independent publishing house based in New York. In addition, she is a professor of Literature and Latin American Cultures at New York University.