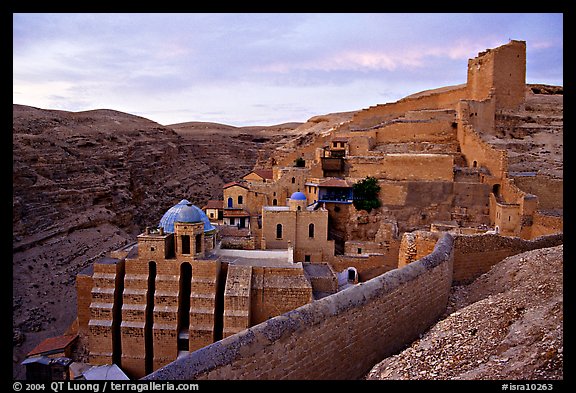 Also known as the Great Lavra of St. Saba, this Greek Orthodox monastery is located east of Bethlehem and overlooks the Kidron Valley.  In addition to being one of the oldest inhabited monasteries in the world, Mar Saba has 110 cells and once housed as many as 4,000 monks in the 7th century.  Though there are only 10 monks today, ancient traditions continue.

Built into the rocks, the enchanting monastery was the home of St. John of Damascus (676-749).  St. John was an important historical figure during the Iconoclastic Controversy — a famous controversy involving the ban on religious icon.  John, who vehemently opposed the ban on Christian icons and images, reportedly wrote 726 letters to the Byzantine Empire.  St. John’s tomb lies in a cave under the monastery.

Holding the relics of St. Saba the Sanctified, Mar Saba is pivotal in the historical development of the Orthodox Church’s liturgy and the way worship services are celebrated.  What was already celebrated in the Patriarchate of Jerusalem became standard throughout the Eastern churches, both Orthodox and Catholic.  The Byzantine World adopted the monastic usages at Mar Saba and while the manner of services have undergone some changes, the legacy of Mar Saba continues.

Take a virtual voyage to Mar Saba by clicking:   http://www.youtube.com/watch?NR=1&v=6Nfo_qtyCAA