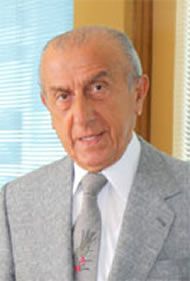 Distinguished member of the Chilean business community, Mario Nazal Momares is the co-founder and director of Palestinian  Bethlehem Foundation  2000, the most important Chilean non-profit organization created with the purpose of establishing a broad nexus of social, humanitarian, educational, religious, cultural and health collaboration with Palestine, with a special emphasis on assisting children with basic education and college scholarships in the Holy Land

Originally from Taybeh, a town located just 10 kilometers from Jerusalem, Nazal Momares is attributed, along with his two friends José Said and Alberto Kassis, with the creation of this project of unity and closeness to the land of their ancestors, safeguarding their traditions and values. It all began in 2000, when these three Chilean businessmen, after returning from a trip to the Holy Land, decided to show the identity of its people and commit to the development of new generations.

Since its establishment, Nazal Momares has devoted his time towards developing the organization’s prestige at both the national and international level, becoming a cornerstone of positive change of the image of Palestinians in Chile and establishing important links between Chile’s Palestinians and the Holy Land.

In his role as executive director, a position he held for the first give years, Nazal Momares organized several fundraising campaigns to help Palestine in different areas of need. It was through this that the agreement with Caritas-Jerusalem was born, to which the Foundation has annually distributed approximately 1,000 scholarships to children in the Holy Land. It has also organized a charity service benefiting the Nativity Church in Bethlehem. Nazal Momares also created a magazine called Al Damir, an annual fashion show fundraiser, and a traditional annual charity dinner called “Fraternal Maklube” which unites the country’s entire Palestinian community.

Nazal Momares has received numerous awards commemorating his life’s work to Palestine, including the personal blessing of Pope John Paul II, which took place in the Mass that His Holiness officiated at the Nativity Church in 2000. He was also declared a distinguished citizen of Bethlehem and decorated by the Palestinian government which distinguished him for his cooperation and dedication serving the country. He has been recognized by FEARAB (Chilean-Arabs Federation) for his invaluable contributions, as well as for his active participation in the expansion and modernization of the headquarters of the Palestinian Embassy in Chile and the Center for Arab Studies at the University of Chile, which is today considered the academic core in Latin America.

The Holy Land Christian Ecumenical Foundation also honored Nazal Momares’ generosity, awarding him the HCEF Award in 2012 for his strong support of the Christian people in Palestine.