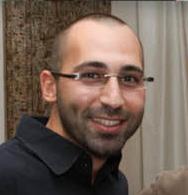 “I see Palestine as a triumph against all odds. We are innovators, both by force and by choice. Despite our painful and difficult history, I not only see our struggle as a cause for justice, equality, peace, and liberty but as an embodiment of so much more: the struggle for Palestine represents how we as human beings choose to live with each other.”

Mohannad El-Khairy is a highly influential entrepreneur and has been the catalyst for some of the first bridging activities between the Middle East and Silicon Valley in California.

El-Khairy is the great-grandson of Sheikh Mustafa El-Khairy, the former Mayor of Ramleh, Palestine. In 1948 in the middle of Ramadan, El-Khairy’s family was evicted from Ramleh with only one suitcase of belongings. They lived throughout various cities in Palestine in the following years, as his grandfather was a district commissioner for the Arab Bank. The El-Khairys were forced to leave again during the Six Day War in 1967, eventually settling in Amman and around the world.

El-Khairy was born in Geneva, Switzerland, and grew up in Riyadh, but spent most of his life in Montreal, Canada, where he studied Economics & Political Science at Concordia University.

El-Khairy began his career in business development with BCA Research, a leading independent investment research firm in Montreal that was later acquired by Euromonitor. At BCA, El-Khairy quadrupled sales revenues and managed over 50 countries in the Emerging Markets, engaging the biggest financial institutions on their macro-investment portfolio strategies. He then moved to Dubai and helped build Zawya, one of the first successful internet startups in the Middle East, later acquired by Thomson Reuters in 2012.

As an avid proponent of the startup culture, El-Khairy then joined Plug and Play Tech Center as Director of International Partnerships. Plug and Play is one of the largest high-tech startup accelerators and investors in Silicon Valley, having invested in companies like PayPal, Dropbox and more than 200 other prominent high-tech firms.

Currently, El-Khairy advises several high-impact companies, from startups to corporations to Venture Capitalists on business, investment and fund-raising opportunities. El-Khairy is also the co-founder of Vyv (angel.co/vyv), which will be a new way to discover content, from news to interest blogs, both locally and globally.

With his wife and daughter, El-Khairy currently lives in the San Francisco Bay Area and is the author of the blog entitled “Money & Mud Uncensored.” El-Khairy’s clever title comes from Money (Fils) & Mud (6een) which together, becomes “Filisteen Uncensored.”