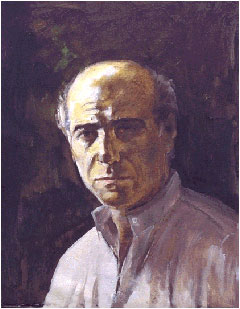 An art historian and artist, Ismail Shammout chronicled the dispossession of the Palestinians through art.  He painted with first-hand knowledge of being a refugee and having been forcibly expelled on July 12, 1948 from the agricultural town of Lydda by Israeli soldiers.  He and his family eventually moved to the Khan Younis refugee camp in Gaza where Shammout volunteered as an art teacher.  After being hired officially as an art instructor, he took his savings of $30 and went to Cairo (Egypt) and pursued his dream of being a painter.

Considered Palestine’s national artist for his devotion to capturing Palestinian history through his paintings, he and his wife artist Tamam al Akhal began Palestine: The Exodus and the Odyssey, a series of mural-like paintings in 1997.  The following year, Shammout returned to Lydda (now the Israeli city of Lod) to see his family’s home after 50 years.