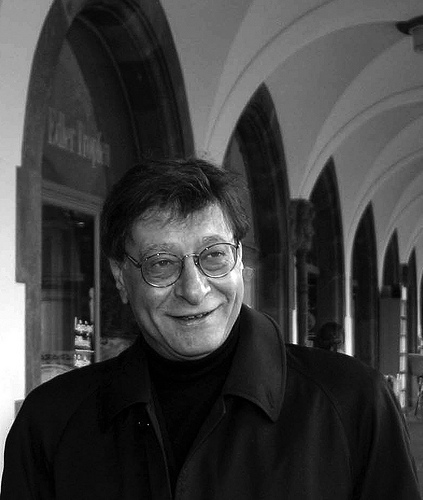 Born in Al-Birwa (British Mandate Palestine 1941), Mahmoud Darwish was considered Palestine’s national poet for articulating the Palestinian people’s thoughts into poetic words.  His most famous early work was Identity Card.  Here’s an excerpt of that 1964 poem – a poem which became a rallying cry for Palestinian identity.

My father . . . descends from the family of the plow
Not from a privileged class
And my grandfather . . .was a farmer
Neither well-bred, nor well-born!
Teaches me the pride of the sun
Before teaching me how to read
And my house is like a watchman’s hut
Made of branches and cane
Are you satisfied with my status?
I have a name without a title!

As a child, his family was forced to flee to Lebanon when Israeli forces stormed Al-Birwa in 1948.  The “Catastrophe” a.k.a. the Nakba and the Palestinian homeland were underlying themes in much of his work.

Darwish was the winner of countless literary awards, including The Knight of the Order of Arts and Letters from France in 1993 and the Golden Wreath of Struga Poetry Evenings (an internationally-acclaimed poetry festival in Macedonia) in 2007.

An unrelenting voice for Palestinian-Israeli co-existence, Darwish told the UK Guardian in 2002 of his belief in humanizing everyone.  A passage from the poem he wrote just after the 1967 war, “White Lilies,” was reprinted.  “I will continue to humanize even the enemy . . .The first teacher who taught me Hebrew was a Jew. The first love affair in my life was with a Jewish girl. The first judge who sent me to prison was a Jewish woman. So from the beginning, I didn’t see Jews as devils or angels but as human beings.”