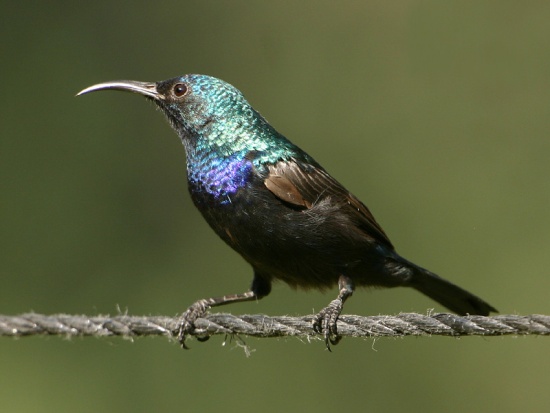 The Holy Land is home to the special and exclusive breed of the family Nectariniidae—the Palestine Sunbird. It’s a passerine bird of the sunbird family comfortably nested in the Holy Land, parts of the Middle-East and sub-Saharan Africa. The Palestine Sunbird is also known as the Orange-tufted Sunbird, for the orange tufts at the sides of the breast.

Listen to how the Palestine Sunbird sings: http://ibc.lynxeds.com/sound/palestine-sunbird-cinnyris-osea/adult-male-singing

Similar to the hummingbird, the Palestine Sunbird sometimes feeds while hovering over flowers. Generally, though, they are perched beside a flower when they feed. Their tongue is long and has a brush-tip in order to extract the nectar from the flowers. The Palestine Sunbird’s diet is comprised of insects and nectar.

The nest of the Sunbird is like none other: it’s shaped like a purse and is made of leaves, grass and other plants—then it’s strung together by hair and spider webs, with wool and feather lining the inside of the nest.