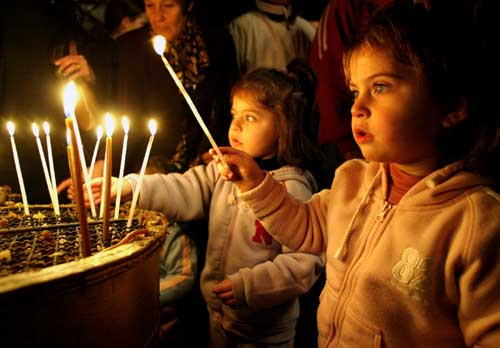 Palestinian Christians are considered the “living stones” of Christianity because they are direct descendants of the Witnesses to Jesus Christ’s Resurrection.

Many fled the Holy Land or were forced into exile during the 1948 establishment of Israel.  The Christian exodus continues today, in large part, due to the Occupation.  On March 25, 2004, the late Republican Congressman Henry Hyde issued a letter to then-Secretary of State Powell stating that the Israeli security wall is “drastically undermining the mission of Christian institutions and the social fabric of their communities in the Holy Land.”  He added that he was “concerned about the plight of the Christian narrative in the Holy Land” and the impact of the security wall and “growing illegal Israeli settlements and their infrastructure…on religious freedom.”

There are two leading American organizations that have been dedicated to the plight of Palestinian Christians.  They are Sabeel(http://sabeel.org/), which is an ecumenical grassroots liberation theology movement among Palestinian Christians.  And there is theHoly Land Christian Ecumenical Foundation (http://hcef.org/), which aims to preserve the Mother Church and her living stones, the indigenous Christians of the Holy Land.

As Anglican bishop of Jerusalem Riah Abu El-Assal has pointed out, Palestinian Christians “are part and parcel of the Arab Palestinian nation. We have the same history, the same culture, the same habits and the same hopes.”

For this reason, Palestinian Christians have historically joined with their Palestinian Muslim brethren in the Palestinian struggle for freedom.  From the late George Habash to the late Kamal Nasser to Hanan Ashrawi, countless numbers of Christians had or have dedicated their lives to Palestine.