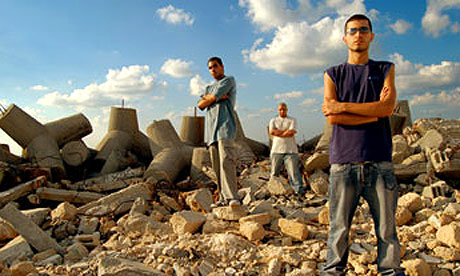 Music has always been one important tool for expressing one’s self in Palestine.  This is especially true for the youth where hip hop or rap has become entrenched. The hip hop culture took root as far back as the mid-1990s with the birth of DAM, the first Palestinian rap group.  DAM is based out of Lydda, now the Israeli city of Lod.  They have toured internationally, including the U.S. in Spring 2010.  To listen to DAM, please click and scroll to the middle of the page:http://palestinenote.com/blogs/music/archive/2010/05/01/palestinian-hip-hop-brings-the-heat-to-new-york-city.aspx

Other rap groups have since formed.  MWR, Palestinian Rapperz, EI48, and The Philistines are just a few.  Though individual in personality and style, Palestinian hip hop groups generally share the traits of being politically-conscious, anti-drug, and anti-violence.

As DAM member Tamer Nafar told Common Ground News in January 2007. “I’m not asking people to be pro-Palestinian or anti-Israeli.  I just ask them to listen, read about the situation, and then decide. Chuck D [from the American rap group Public Enemy] said that rap music is the CNN of the streets – so in that case, we are the Al Jazeera.”