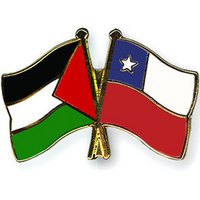 It’s been said that in every small village in Chile, there are sure to be three things — a priest, a policeman, and a Palestinian. That may or may not be true but there are approximately 350,000 – 500,000 citizens of Palestinian descent in Chile – the largest Palestinian community outside the Middle East. The majority of them are Christian and come from the Bethlehem area. They began immigrating as far back as the 1850s, working in the areas of business and farming. They even founded many churches including the Iglesia Ortodoxa San Jorge in Santiago as far back as 1917. The numbers increased during the 1948 war in Palestine.

Refugees have always found Chile to be friendly and a special “home away from home.” In 2008, 117 Sunni Muslim Palestinian refugees, who had been stranded between Syria and Iraq, were warmly received by politicians in a big celebration.

Not only have Palestinians established one of the most prestigious community organizations in Santiago (Club Palestino), but they also have a professional soccer team (Club Deportivo Palestino). The team, established in 1920, has been the champion of the Chilean Primera (First) Division.