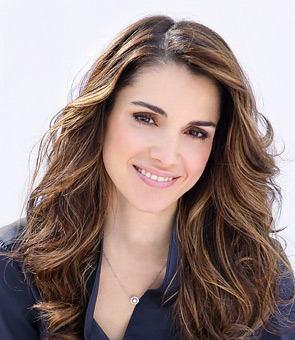 The world’s youngest queen at the time of her coronation, Rania, is of Palestinian descent.  Her Royal Highness was born in Kuwait to affluent Palestinian parents and graduated from the American University in Cairo with a business degree.  In 1991, she moved to Jordan where her parents had settled after fleeing Kuwait along with hundreds of thousands of other Palestinians following the 1991 Gulf War.   In Jordan, she would meet her future husband, Prince Abdullah II – son of the Late King Hussein.

A mother of four, Queen Rania is renowned for her philanthropic work and speaks out on a number of issues, including: the protection of children from violence and ending the controversial “honor killings” — murders committed by men against sisters or daughters for “dishonoring” their family, often by violating social traditions.  A UNICEF Eminent Advocate for Children, she has written in observance of Palestinian Child Day by highlighting the daily challenges that confront them.

In addition to receiving many international humanitarian awards, including the Special Olympics International award (for supporting people with intellectual disabilities) and the the 2005 Austrian ‘My Way’ Award (for her extensive social work), Queen Rania has been selected in People Magazine’s 50 Most Beautiful People and named among Forbes’ 100 Most Powerful Women.

In 2008, Queen Rania launched a YouTube channel in an effort to reach out to young people and engage in a dialogue that would help dispel stereotypes about Arabs and Muslims.  See:  http://www.youtube.com/watch?v=TFf897bUW2Y&feature=watch_response_rev

Always a champion of dialogue and promoting understanding, she co-authored, “The Sandwich Swap in 2010.   The story explores how differences can enrich our lives.