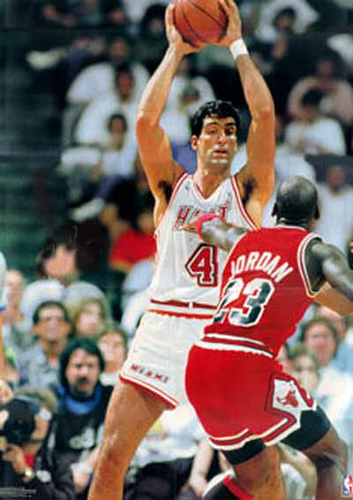 Born in Lebanon, this retired National Basketball Association (NBA) player’s roots are Palestinian (specifically, in Haifa). Rony Seikaly’s family moved from Lebanon to Greece when he was a child — a place where his athletic skills continued to flourish.

Before becoming a record-setting star for the Miami Heat, Seikaly played center for Syracuse University and led them to the 1987 NCAA tournament championship against the Indiana Hoosiers. After being drafted by the Miami Heat in the First Round (1988), “The Spin Doctor” (nicknamed so for his trademark low-post spin moves) went on to earn countless awards including 1990 NBA’s Most Improved Player, Miami Heat record for rebounds in a season (934), and Miami Heat record for free throws made in a game (16). Seikaly went on to play for the Golden State Warriors, Orlando Magic, and the New Jersey Nets before retiring from the game.

To see highlights of his career, please see: http://www.encyclopedia.com/video/gYivpvXgEog-roni-seikaly-lebanese-lebanons-exnba.aspx.
His heart still in Miami, businessman Seikaly is an investor in the South Beach, Miami restaurants Quattro, Sosta, Sole, as well as Quattro NY. In addition, Seikaly hosts the annual Rony Seikaly Golf Tournament for cystic fibrosis.