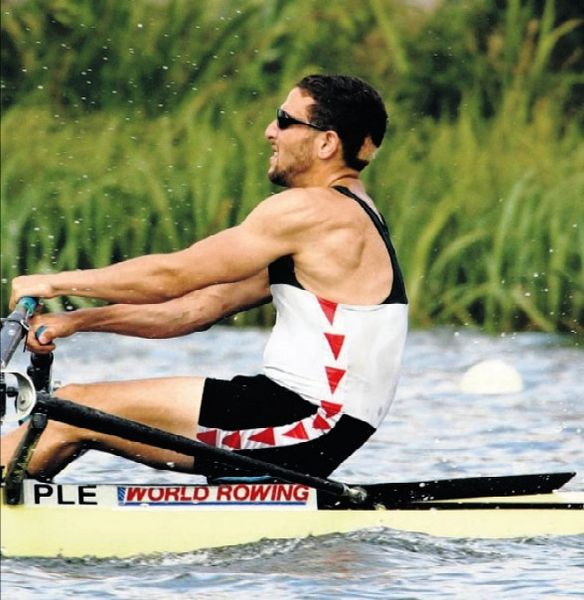 A quintessential example of peaceful co-existence between Arabs and Jews, professional rower Mark Gerban was born to a Palestinian father and a Jewish mother.  Gerban made history when he became the first man to represent Palestine at the World Championships for the sport of rowing.  The Philadelphia-born athlete participated in the Lightweight Men’s Single.

A triple major at Drexel University, Gerban worked at CIGNA Corporation before turning professional in 2005.  He had trained and competed with German National and Olympic Team athletes. He was fully sponsored by the Palestinian Rowing Federation and trained under Coaches Iradj El-Qalqili, Martin Strohmenger and Rita Hendes in Hamburg, Germany.

Always an advocate of Palestinian-Israeli peace, Gerban had written a series of articles on the tragic conflict for the university’s newspaper while at Drexel.  In response to those who wielded accusations that he was Anti-Semitic, Gerban eloquently responded with the following:

I think both the Palestinians and Israelis can live together — my family proves it. The only thing we can hope for is to find the right leadership and the will to compromise. Remember, when a strong military force like Israel pressures the Palestinians, who have almost nothing to lose, you will almost surely observe a rise of armed militants who are willing to resolve to dirty fighting (suicide bombings, etc.) as a last resort. Seeing the entire perspective has really changed my views. Yes, I believe that this “issue” can be settled peacefully, but only if the Israelis and Palestinians put their differences aside — before it’s too late.