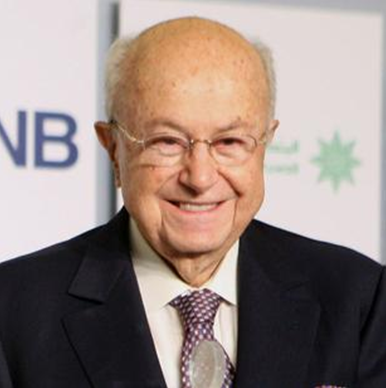 Born in 1923in Safad, Palestine, Said Khoury is a prominent Palestinian-Christian entrepreneur and considered as one of the top 1000 wealthiest people in the world. He is the Chairman and President of the Consolidated Contractors Company (CCC), the largest construction company in the Middle East, founded in 1952.

After graduating from the American University of Beirut in 1946, he returned to Safad to work with his father, a rich landlord who used to hold the fishing rights for the Sea of Galilee. Not long after, Mr. Khoury founded his own construction business with two other business partners.

Aside from his business aspirations, Mr. Khoury is an active philanthropist. His fingerprint is on almost every program and initiative created to support Palestine and the Palestinians, including the recent Bethlehem Development Initiative, a project intended to restore and rebuild Bethlehem.
Furthermore, he has sponsored the establishment of the Said Khoury IT Center of Excellence at Al-Quds University. He was honored as HCEF’s recipient of the 2013 Palestinian Diaspora Award.