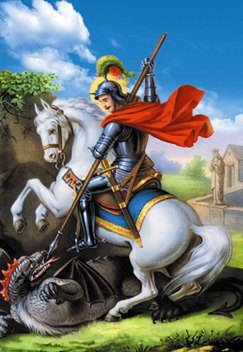 St. George, one of the most important figures in Christianity, was born to a Palestinian mother from Lydda, Palestine and a Cappadocian (Turkish) father in the late 3rd century.  A soldier in the Roman Empire, he was tortured to death by an edict of Diocletian after confessing to being a Christian.  Buried in Lydda (now the Israeli city of Lod), St. George is famously immortalized in the tale of George and the Dragon.

According to the Golden Legend, a terrible dragon lived in the marshes of modern-day Libya and maidens were sacrificed to calm the dragon since the usual sheep sacrifices failed.  George arrived in time to save a king’s daughter by making the sign of the cross and killing it with his lance.   He distributed his reward to poor locals and converted them.  Because of his chivalry, fighting evil, and protecting women, devotion to St. George became popular.

In addition, Palestinian Muslims revere St. George, whom they refer to as al-Khadr.  His main monument is the elongated mosque Qubbat al-Khadr (”The Dome of al-Khadr”) on northwest corner of the Dome of the Rock terrace in Jerusalem.

To hear more about St. George and a Bethlehem church dedicated to him, please see: