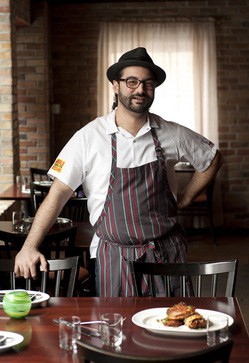 “As an Arab-American, a Palestinian, to be particular, there’s a lot of negativity going around, there’s a stereotype, so I try to bring that into a more positive outlook. I find myself to be an ambassador to my people, my culture…I want to leave that as a stamp, as someone who tries to truly represent the culture and immigrants from all over, in a very positive way.”

Born to Palestinian parents in Kuwait, Sameh Wadi is an all-star chef, restaurant owner and cookbook author in the United States. He boasts one of the top eateries in Minneapolis, Saffron Restaurant and Lounge, and claims the title of the youngest participant to ever compete on the Food Network television series Iron Chef.

The journey to Wadi’s culinary success began in the home, where his parents instilled in him a love for food in all aspects, most importantly to experiment with new flavors and ideas. At home, his mother was the expert at cooking various Palestinian dishes, while his father on the other hand, took the lead when experimenting with international dishes, spices and ingredients. Wadi spent his childhood shadowing his mother as she cooked, honing his instinct of cooking from memory, without recipe, without measurements.

Wadi’s passion for food and cooking continued, and he went on to attend culinary school in the United States. There, he specialized in Mediterranean cuisine and worked to bring his dream of opening a restaurant to fruition. In 2007, Sameh and his brother Saed opened Saffron Restaurant and Lounge, currently one of the top restaurants in Minneapolis, Minnesota.

The Wadi talent did not end there – taking from their father’s talent and interest in international cuisine, Sameh and his brother opened a food truck serving international street food. It instantly became a Minneapolis sensation and they were compelled to turn the food truck into their second restaurant – World Street Kitchen. And if that was not enough, Sameh Wadi is the proud author of The New Mediterranean Cookbook, and owns a line of gourmet spices.

Wadi continues to garner nationwide attention, and was recently interviewed by the New York Times on customary meals during Ramadan.