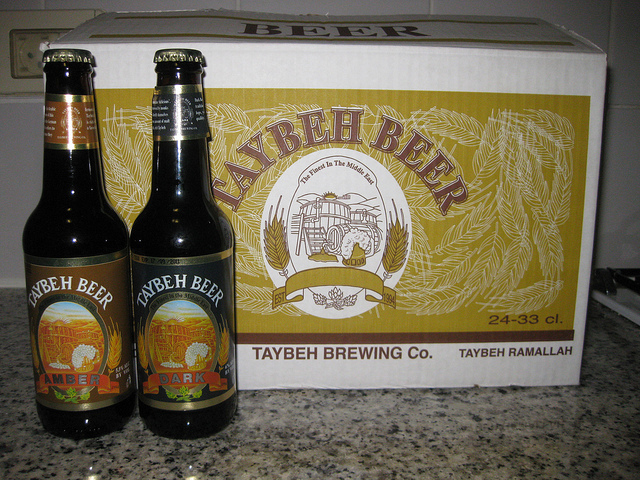 Once brewed in ancient Egypt thousands of years ago, beer is now brewed in Palestine.  One of the first micro-breweries in the Middle East, the brewing company was established in 1994 and is located in Taybeh — a Palestinian Christian village in the West Bank.

Taybeh Beer was the first Palestinian product to be franchised in Germany, where it was brewed and bottled for sale in Europe.  Taybeh Beer is considered unique because it is made according to the German purity law of 500 years ago which states that the beer should be made out of four basic natural ingredients: malt, hops, pure water, and yeast, following every aspect of the German brewing process.  Taybeh Beer produces three varieties:  Golden, Light, and Dark.  Taybeh Beer has also developed a non-alcoholic beer (Taybeh Halal).  Taybeh Halal has helped address the concerns of Muslim clientele who are banned by religion from drinking alcohol.   See: http://www.taybehbeer.com/

The company, which advocates the concept that “political independence is dependent on economic independence,” offers complimentary tours for tourists along with offering samples of the unpasteurized beer.

Oktoberfest, the annual Bavarian beer festival, has been celebrated annually in Taybeh since 2005.  It is not uncommon to find some Palestinians linking arms and swaying to music as is common in Germany.  Rugby and exhibits are also part of the festival.