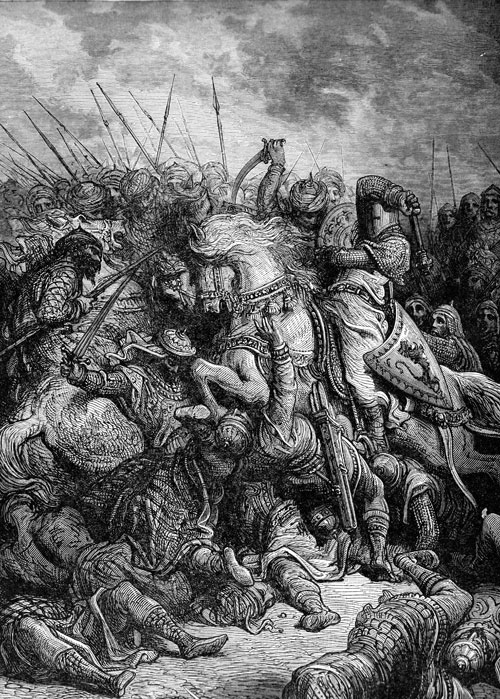 The Crusades were a series of nine wars sanctioned by the Roman Catholic Church spanning from 1095-1291.  The military campaigns aimed to re-establish Christian control over the Holy Land a.k.a. Palestine and secure safe passage to Christian pilgrims.

While the Crusades were primarily between Christians and Muslims, the reality is that the European Crusaders did not distinguish between the Muslims, Christians, or Jews of the Holy Land.  Anyone who looked Middle Eastern was fair game for slaughter in the name of God.  For this reason, Christians and Jews fought alongside Muslims against the Crusaders.

As Dr. Anthony McRoy of the Evangelical Theological College in Wales has noted, the Muslim leader “Salahadin recaptured Jerusalem in 1187 and restored the Greek Orthodox churches to their original owners from the Frankish Catholics.”  Also interesting is Salahadin renaming the Palestinian Christian town of Taybeh (meaning good or well) from its former biblical name of Ephraim (similar to the meaning of demon) while camping out in that village.

For the Jews of Palestine, the Crusades represented the beginning of centuries of persecution in Europe.  Furthermore, martyrdom was not uncommon.  According to one doctoral student researcher of Hebrew and Judaic Studies at New York University, “These chronicles report Jewish parents killing their children in a manner similar to Abraham’s near sacrifice of Isaac and Jews examining knives to ensure that the killing of their brethren was done according to the laws of kashrut. In some instances, Jewish martyrs insulted their Christian attackers before being killed as a way of displaying their ultimate faith in God.”