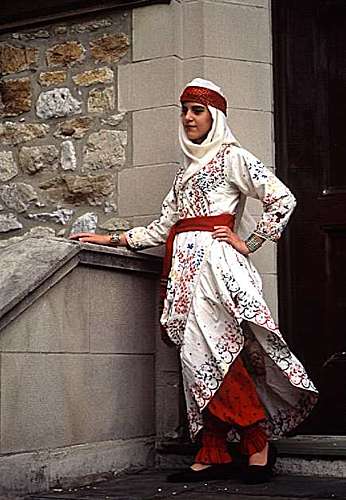 The Embroidery and Identity

There was a time when Palestinian women wore traditional, hand-crafted long dresses adorned with embroidery unique to their specific region of Palestine. In fact, foreign travelers in the 19th and early 20th centuries often marveled at the rich and vibrant dresses.

Experts of ancient Middle Eastern history have noted that Palestinian clothing show a similarity to clothing worn 3,000 years ago, as depicted by artists. One of the most famous and widely reproduced religious paintings was William Holman Hunt’s 1871 painting, “The Shadow of Death.” In it, the Virgin Mary is dressed in clothes a woman from southern Palestine would have worn on a typical day in the 19th century.

From the richly-embroidered, ornamented coats with the red silks representing Galilee to the predominantly striped silk dresses of Jerusalem (fabric imported from Syria, famous for its textile production centers) to the heavily cross-stitched dresses with multi-color silk threads of Jaffa, the dresses were beautiful and exquisite garments that also symbolized pride and identity. Quite simply, Palestinians could identify where a woman came from by the embroidery and colors on a woman’s dress.

To view some of these dresses, go to: http://www.palestineheritage.org/gallery.htm
While the traditional dresses are rarely worn, some Palestinian dress designers have developed modern interpretations while still maintaining the charm and characteristics of pre-1948 designs.