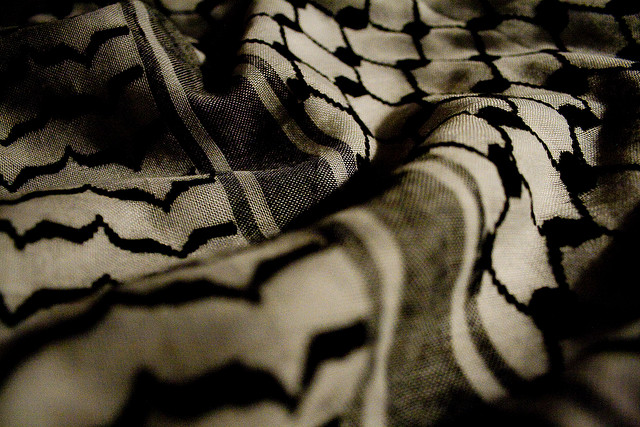 The black-and-white checkered wool/cotton headdress became a symbol of Palestinian nationalism and solidarity during the 1936-1939 Arab revolt against British colonialism and mass immigration of European Jewry into Palestine. In the 1960s, some Palestinians began to wear red-and-white checkered headdresses to demonstrate their Marxist principles. These days, however, the red-and-white headdress also demonstrates support for Hamas.

It is noteworthy to point out that the Jews of Palestine also wore keffiyehs. As with most Semitic peoples of the Bible, men wore different variations of the headdress to protect their heads from the intense Middle East sun.

While the Palestinian keffiyeh continues to be a symbol of Palestinian heritage, it has also become a fashion trend for famous celebrities. From actor Colin Farrell to singer Sting, the Palestinian keffiyeh has been worn. Picking up on the popularity of the keffiyeh, the Chinese are even mass producing them, endangering the existence of the only Palestinian textiles factory to authentically produce them. (Herbawi Textiles in Hebron, Palestine http://www.thekufiyehproject.org/palestine.html)

In 2010, Palestinian refugees in Lebanon gathered at Beirut‘s Camille Chamoun Stadium to beat a previous record set in Spain for the largest chain of keffiyehs. A reported 6,500 were used in the chain, setting a Guinness World Record.