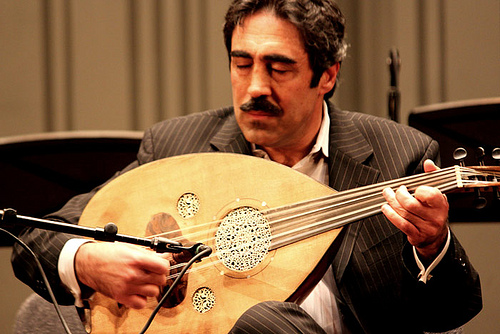 A recipient of the National Heritage Fellowship from the National Endowment for the Arts in 1994, Palestinian violin and oud (Arabic guitar) virtuoso Simon Shaheen not only has his own ensemble but has also performed with the likes of the late Columbian singer Soraya and the Jewish Klezmatics.

Born in Galilee to a musically-gifted family, Shaheen started playing the oud at a very young age and then the violin soon after at the Conservatory for Western Classical Music in Jerusalem.  He said that when he played those instruments, “they felt like an extension of my arms.”

After earning a degree in music and Arabic literature from Tel Aviv University, he arrived in the U.S. in 1980.  As a performer, he sought to play at many festivals and it was his goal to travel freely as an American citizen.

After receiving the 1994 fellowship, he told the New York Times, “I never give a concert and play music and leave the audience wondering. I always talk to the audience to make sure they understand at least 60 to 70 percent of what I’m doing. I am trying to bring awareness.”

For the last several years, Shaheen has focused much of his energies on his band, Qantara.  The band brings a fusion of Arabic, jazz, Latin, and classical music to create a unique sound.