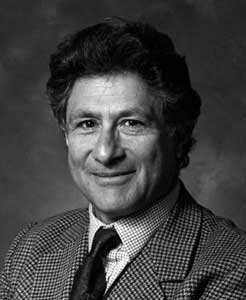 Born in Jerusalem and raised in both Jerusalem and Cairo, the well-respected and articulate Palestinian Christian Columbia professor, author, and world literary critic revolutionized Middle East studies throughout the Western Hemisphere with his 1978 book, “Orientalism.”  The premise was that the West’s views of Middle Eastern culture were filled with irrational and violent stereotypes, ultimately justifying Western colonialism of the Middle East.  To hear the late Dr. Edward Said in his own words discussing Orientalism, please see the following video from the Media Education Foundation:  http://www.youtube.com/watch?v=xwCOSkXR_Cw

Disappointed with a peace process that lacked a strong stance on the Palestinian refugees’ right of return, Dr. Said began to advocate the peaceful coexistence of Palestinians and Israelis in a single democratic country or bi-nationalism.  He wrote in the New York Times, “I see no other way than to begin now to speak about sharing the land that has thrust us together, and sharing it in a truly democratic way, with equal rights for each citizen.”

An accomplished pianist, Dr. Said and Argentine-Israeli pianist Daniel Barenboim together formed the West-Eastern Divan Orchestra — an award-winning youth orchestra made up of Palestinians, Israelis, and Arabs from neighboring Arab countries.

Even when Dr. Said was struggling with cancer, he continued to be a strong voice for the Palestinians.  Years before he fell ill, he told author Salman Rushdie in 1986, “The vast majority of our people are now thoroughly sick of the misfortunes that have befallen us . . . On the other hand, I have never met a Palestinian who is tired enough of being a Palestinian to give up entirely.”