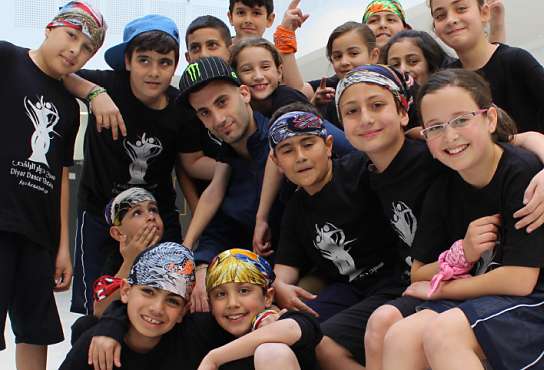 Youth and the Arts

While resources are limited for Palestinian youth looking to cultivate their talents in drama and music, important steps have been taken.

First, there is the Palestinian Youth Orchestra (PYO).  Created in 2004, the PYO is the flagship orchestra of the Edward Said National Conservatory of Music (ESNCM). It has successfully brought together young Palestinian musicians from around the world. A quality youth orchestra of about 80, PYO students meet once or twice a year for a 10-day residential course followed by a concert tour.

To hear CNN’s feature on PYO, please click on this link

Funded by the European Union, a music laboratory has also been built in Jericho to reinforce the outreach program of the ESNCM.  A room in the Jericho Kids Club was renovated and made sound-proof; equipment and musical instruments were provided.  Teachers will be trained and sent to a few West Bank towns, including Hebron and Bethlehem to continue the mission of further enriching the lives of youth through music.

Those interested in pursuing drama now have the option of applying to Palestine’s first ever drama academy.  Based in Ramallah, the academy was made possible with an initial fund of 300,000 Euros ($530,000)  provided by the German organization Stiftung Mercator, the Ramallah-based al- Kasaba Theatre and Cinematheque, and Germany’s Folkwang University.

At the inauguration, al-Kasaba theater director George Ibrahim said, “At the end of every school year, students interested in theater would ask me where they can learn drama and if there is any possibility to study it here in Palestine.”